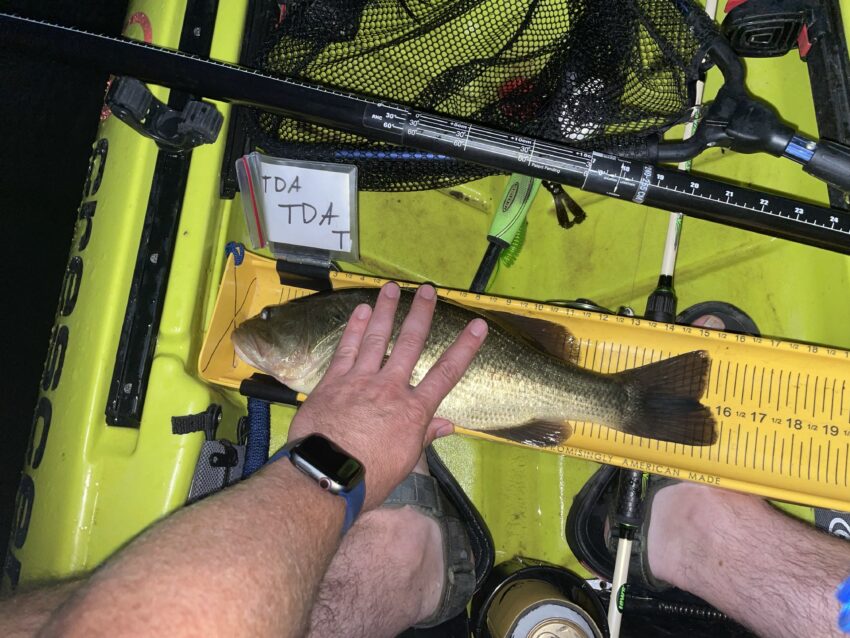 I didn’t look at the weather as I headed to the lake, but I did pay attention to the time. I knew I would be out after dark and prepared (or so I thought) by making sure that I had my light pole with me.

I launched the kayak, started paddling and realized that the wind was aggressive! I made sure that I was paddling into the wind to make the trip back easier. Wind speeds were 10 MPH with 15 MPH gusts. The waves on the water were white capping and a couple even came over the bow of my kayak.

There was no way I could fish during this so I beached the kayak at a cove and through some lures around. After trying a few top waters, I tied on a brand new Westin Squarebill. The very first cast it snagged and the line snapped when I tried topop it loose. I had to laugh.

I reverted back to a Ned Rig and got that snagged. I loaded back in the kayak and paddled over to free it up. The wind blew me toward the opposite shore and I just went with it. I figured I would throw from that angle and see if anything happened.

As I set the bow up on the bank, I noticed a blue-green thing floating in the water. It was my squarebill! I picked it up and put it back in the tackle box. Today was clearly not the day for that. I caught one small bass and one small sunfish in that cove and decided to move on.

Somehow, the wind picked up. About halfway to the next cove I was paddling to just maintain position. I wasn’t in a hurry so I just rode it out.

The next cove had huge patches of hydrilla that were just cresting the surface. The water is also fairly clear and I could see smaller fish under the cover. I tied on a walking frog and started pulling it over the patch. I only had one fish interested and it missed the frog entirely.

The sun was set and it was getting dark quick. I turned on my light, opened up a beer, and tied on a buzzbait. I was expecting a no paddle drift back to the truck. Of course, that’s NOT what happened. The wind just completely died. Not what I wanted, but paddling in calm is better than paddling into the wind. I kept tossing out the buzzbait, but got nothing. Glad I had a beer.

Once the dark really settled in, a bass jumped out of the water inches from my boat! I jumped too! I had a good feeling about throwing out the top water in that area. It definitely paid off! I caught 3 in a row, they were smaller than I need, but it’s great to catch. I also realized, without incident, that the trailer hook on the buzzbait was a bad idea in the dark. I had my thumb sandwiched between the two hooks at one point. I removed the hook got back casting. Nearly every other cast was getting a bite. I was really in tune with the sound tonight and got solid hooksets on all of the bites over there! I finally caught one that had some size to it and measured it at 15.75″ It was probably 16 if I had smoothed out its tail, but I was fighting my phone trying to get flash on for the picture. Either way, that fish helped by bumping a 13″ fish off the board.

This pattern continued for a few more casts until I tossed one in a tree. I paddled over to retrieve it and bass were just jumping everywhere! I was so excited to the lure out of the tree and get back casting when I heard the buzz. A cloud of mosquitoes had surrounded me! literally dozens on my arms. I felt like I was wearing a long sleeve shirt made of mosquitoes. I didn’t bring any bug spray and had to retreat.

I definitely need to keep some bug spray in my boat. We’ve also had really good results from the Thermacell repellants in the back yard. That might be a good option as well.

I’m definitely going to get back out after dark and get on the great topwater bite!